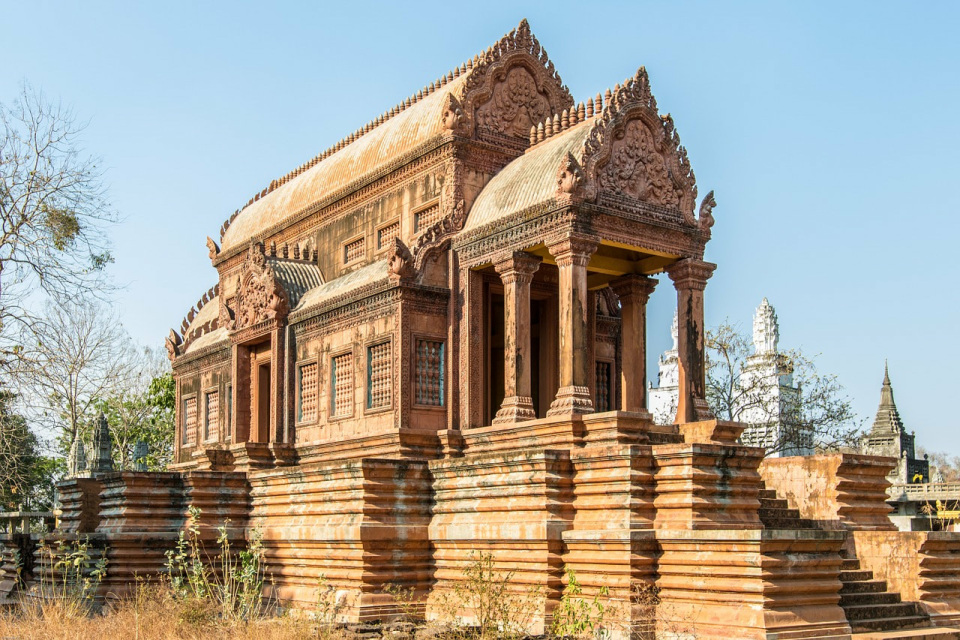 While the Mekong gets all the press starting as it does in the highlands of Nepal and flowing into the sea through the Delta in Vietnam; in Cambodia, it is the Tonle Sap river and lake that provides the links between cities and binds the country together.

​Take a trip with us through the heart of Cambodia, enjoying an elegant vessel as you cruise and two funky boutique hotels on either end of your trip. For the free spirit in all of us.
SKU:
Add to Cart

Explore: the heart of cambodia

You board your aircraft this evening eager with anticipation for the exotic trip ahead of you. You will cross the International Date Line arriving in Southeast Asia two days later. All the more time to contemplate your Luxury Cambodian Adventure.

Day 3: Arrival in Cambodia and a Feel Good Evening

You arrive in Siem Reap. This cosmopolitan city is best known as the location of Angkor Wat but it has other attractions to hold your interest. Upon arrival you are met and taken to your hotel where you have free time to rest for the evening and the days ahead.  Dinner tonight is at Marum, a training restaurant for young adults, working with street children and other marginalized young people to offer vocational training in hospitality or cooking to transition into the real world. You will then enjoy a performance of Phare, the Cambodian Circus. Set up in 1994 by young returnees from the refugee camps that learned about using art as means to cope with trauma after the Khmer Rouge genocide. The show mixes music, dance, acrobatics and juggling.
Breakfast and Dinner

After breakfast you will be picked up by your guide and taken to Angkor Wat which was built during the reign of King Suryavarman II in the early 12th Century. It was constructed following the model of the temple mountain symbolizing Mount Meru, home of the gods. Inside the temple the walls are covered with stone carvings and bas-reliefs depicting Hindu mythology and the wars Suryavarman II fought during his reign. After touring the complex you will be taken to another famous temple, Ta Prohm where the large fig trees have merged with the ancient stones and left untouched by conservationists. Because of its unusual facade it has starred in many movies including Indiana Jones, Lara Croft, Tomb Raider and Two Brothers. Following lunch at a local restaurant visit the ancient city of Angkor Thom which was the last capital of the great Khmer Empire under the reign of Jayavarman VII. The city is surrounded by a 24 foot wall, creating a perfect square. You enter the city through the ancient south gate, an impressive stone gate carved with elephants and four giant faces. As the sun begins to set, you board a paddle boat on the moat of Angkor Thom compound enjoying champagne and canapes as you watch the sun set over Prasat Chroung temple.
Breakfast and Lunch

Day 5: All aboard for Phnom Penh

After breakfast you will have the morning at leisure. You will be sailing from Siem Reap to Phnom Penh including time sailing on the Tonle Sap which is the flowing heart of Cambodia and has more fish than any other lakes in the world. At noon you will transfer to your ship where you meet your crew before enjoying a buffet lunch. You begin your cruise and glide on the smooth waters. Dinner is served in the dining hall.
Breakfast, Lunch and Dinner

Every day, your journey will start with an invigorating Tai chi lesson on the sun deck just as the sun begins its slow rise. Coffee and tea awaits the early bird. Before dawn the ship sets sail across the Tonle River, you see spectacular marshlands floating along the river banks of the Kampong Chang province. The afternoon cruise continues with a languid meander along the Tonle Sap River. Here, the river is so narrow that you can be greeted by kids waving enthusiastically at you from the banks. Take a short bus trip to see Khmer-styled pottery. You then embark to see the wetlands, floating houses and fish farms in the region before reaching Kampong Cham in the evening, Further down the river we take part in an ox cart rally.
Breakfast, Lunch and Dinner

Day 7: The Temples of Wat Hanchey and Wat Nokor

You will wake up in the early morning after an overnight cruise, truly energized to embark on a land journey to the pre—Angkorian temple of Wat Hanchey. You can either take a motor-taxi or climb 303 steps to the top. Located at the top of the hill overlooking the river, the temple offers one of the most breath-taking views in Cambodia. You will return to the ship to witness a blessing ceremony performed by orange-clad monks. You will cruise towards Kampong Cham to visit Wat Nokor, built within the ruins of an ancient temple. You will anchor midstream near Phnom Penh.
Breakfast, Lunch and Dinner

Phnom Penh was once the Paris of the East. Despite its rapid development, it has retained a lot of its rustic charm and elegance, Sightseeing in the morning will include the Killing Fields. Be prepared to be heat-wrenched by this stark reminder of the genocide that transpired during Cambodia’s Khmer Rouge regime, then visit S21 Genocide museum. After lunch at a local restaurant you will visit the former Royal Palace, now the National Museum. Return to the ship by cyclo for a rest as you get ready for your last night on board. The evening starts with cocktails on the sun deck followed by a BBQ dinner in the open air. Top it off with an Aspara dance performance.
Breakfast, Lunch and Dinner

Day 9: The Architecture of Phnom Penh

After breakfast you will disembark and your guide will meet you and take you to your hotel to check in.  Your guide will then take you on an interesting journey based on the Cambodian architecture of the late 1950’s and 1960’s a vibrant time both culturally and architecturally. This new architecture focused on integrating international style with local tradition, materials and climate. You will have lunch at Van’s Restaurant housed in the historic building of the Indochina Bank built in 1900 and former home of the Van family. After a tour of the villa enjoy an exquisite lunch of French delicacies. After lunch explore the adjacent French Quarter by cyclo. The cyclos will bring you to the port where you will take an evening boat trip to view the riverfront at night filled with interesting examples of the city’s various architectural periods from pagodas to French Colonial to Contemporary architecture. Return to the hotel to freshen up before enjoying dinner at Bopha Phnom Penh overlooking the river.
Breakfast, Lunch and Dinner

Today you will be transferred back to the airport where you board a flight for the USA. You “gain” the day you lost coming over and arrive back the same day.
​Breakfast 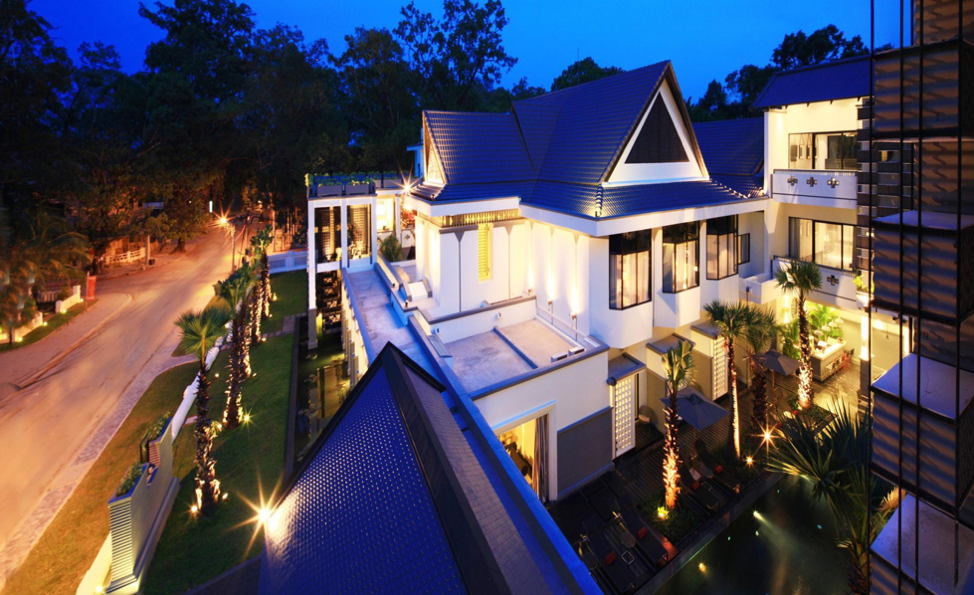 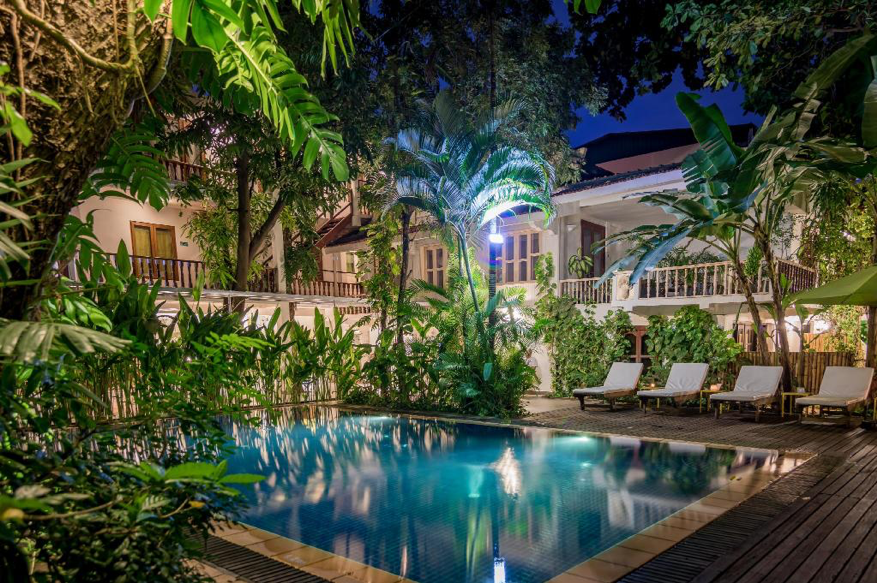